Cleaning Up Your Act – Recycling in Theatres 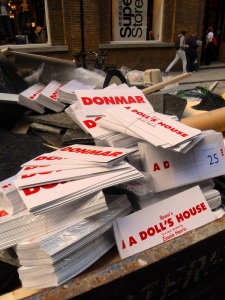 The flyers of A Dolls House in a skip

What with the current climate of affairs around the world, you would have thought that businesses and companies around the world were pulling their weight with their efforts to do their bit in saving the environment. Although it can be difficult to recycle everything that is passed through a business the developments that we have gone through recently at least the ability for paper and cardboard to be recycled can be achieved easily.

Yet somewhere along the way it would appear that the Donmar Warehouse have bypassed the logic of recycling and instead attempted to dispose of their brochure/flyer by a bit of dumping in a skip. This picture has just broken into the Twitter-sphere via @jamesarnott, and quite frankly I am appalled by such obvious dumping of something which could easily be recycled.

It makes me call for theatres to seriously consider their attempts at recycling. It is down to a sheer lack of effort and laziness for not doing their part in the efforts of disposing of waste effectively.

However, this isn’t just a nag about the need for recycling because there are currently many theatres whose recycling polices are truly remarkable, and even their efforts to make their theatres as Green as possible.

High praise can go to the Arcola Theatre where their project titled Arcola Energy established in 2007 aims to make the Arcola Theatre the ‘worlds first carbon neutral theatre’. But beyond this they aim to offer help to other organisations in turning their waste into greener more productive methods to empower their companies. Perhaps the Donmar Warehouse could take a lesson from the Arcola Theatre?

Also the Arcola Theatres offers Green Sundays, where like minded people can come and meet, discuss ideas and relax in their eco-cafe and roof garden.

It is hard for theatres to truly be environmentally friendly with the sheer nature of energy which is consumed during performances and shows. The lights alone seep up a hefty electricity bill, without having to deal with costs of running heating/air con in huge auditoriums. But the least us theatre people can do is the ensure that recycling is done to the best of its abilities.

Remember even by recycling a single piece of paper, you are saving our environment from damage.

This entry was posted on Friday, July 24th, 2009 at 1:28 pm and is filed under Critical, News, Theatre. You can follow any responses to this entry through the RSS 2.0 feed. You can leave a response, or trackback from your own site.

One Response to Cleaning Up Your Act – Recycling in Theatres