Tim Crouch’s new play at the Royal Court Theatre is possibly more about the spectator than that of the play itself. Or perhaps the act of spectating is what the play is about. A confusing matter nonetheless, where an explanation is needed.

There is no stage for The Author, instead two tiers of seating banks face each other, and thus the simple idea behind one of the key themes of the play is played out. You sit, as an audience member, facing the audience. A strange concept to attempt to grasp. Yet from the very moment you sit down and suddenly realise that you have no choice but to look at those opposite you, a strange event occur. You start to spectate upon the spectators.

A friendly gay couple flirted opposite me, while a man saved a space for his friend using his jumper. Another young man looked at himself in a compact mirror chattering excitedly with his female friend. It was hard to define at which point the performance had begun, was any of the above part of the performance? Then a slight change shifted, when a single man began talking excitedly to anyone and everyone around him, tapping them on their shoulders to speak with them. Ah ha, I thought, it has begun. 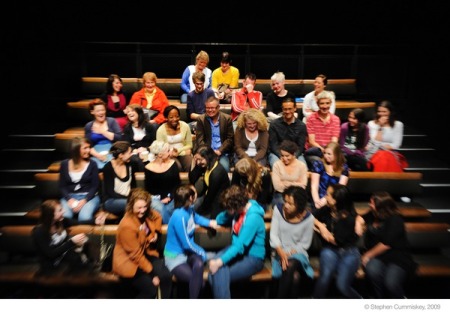 Spectating on the Spectator

The play itself is clever, there is no doubt about it. It is charming, witty, and heart warming, yet equally disturbing. It’s a complex piece, full of multiple layers of meaning. Crouch has managed to interweave the spectator into the heart of the drama itself. At first there is nervousness as anyone and everyone within the audience could be called upon to answer questions, to be spoken to, or just for a moment have a whole seating bank stare at them as they pretend to ignore the very matter of the play itself.

The interspersed music allows for light relief within the piece. There is something daunting about public speaking when you only came to spectate. The music starts and everyone turns to their respected friends, talk, laugh and relax a little. The music stops, and we are back to watching once more.

What is clever about this piece is just how perfect Crouch has managed to judge audiences. He knows how to pass them from emotion to emotion, he understands the relationship between the audience and the subject matter. He brings them straight into the action, and then just when you trust the work, he alienates us all. Do we trust a writer/director who reels us in and then so easily discards us? It’s a hard question to answer, but for the most part, Crouch has played the part well.

The play/story itself is a difficult one to judge, mostly because of the relationship that the spectator has within the play itself. The Author isn’t just about Tim Crouch as a person (an author), nor the fantasy role of Tim Crouch the perverted man who performs a terrible deed on a baby.

The Author is a modern day look at the nature of theatre audiences and our overwhelming desires to sit and spectate without being spectated.

Let the actors, act! And the audiences, watch! Let us not combine the two, but Tim Crouch is set about breaking apart these theatre conventions.

Whilst The Author did not knock me sideways, it certainly left me thoroughly confused, and amused. It made me question conventions of theatre, challenged me to actually accept that I was part of a performance, and that equally I could look and judge the people opposite me. The work is challenging and is not for everyone, especially people who don’t want to be noticed, but for those up for a different night, it is highly recommended.

The Author runs at the Jerwood Theatre Upstairs, the Royal Court Theatre until 24th October. Book online or by calling 020 7565 5000

This entry was posted on Monday, October 5th, 2009 at 1:31 pm and is filed under Reviews, Theatre. You can follow any responses to this entry through the RSS 2.0 feed. You can leave a response, or trackback from your own site.

One Response to Review: The Author